An ambitious project to build a roundhouse was conceived after AOC Archaeology discovered an Iron Age settlement near the Black Loch of Myrton in Wigtownshire, Dumfries & Galloway in 2015. When the Iron Age house, circa mid 400’s BC, was uncovered by the archaeologists and volunteers, they found evidence of a hearth, flooring and structural timbers.The Black Loch site is giving archaeologists a chance to employ 21st Century techniques on an excavation of Iron Age buildings, yielding a uniquely clear view of the nature of Iron Age settlement in South West Scotland, allowing the recreation and arrangement of living and working space in a 2500- year-old house in a way that has never been possible before

The plan is that this evidence will now be used by craftsmen and volunteers to build a complete replica, to be used as a prehistoric education resource, arts venue and to provide a unique visitor experience. In January 2016 The Whithorn Trust secured £87,000 of Heritage Lottery Funding for the roundhouse project.

With a brief to create a replica of the original roundhouse using materials and structural form based on the latest findings, Finite Engineering Ltd was engaged to provide the required structural services to obtain the more modern concept of building warrant approval.

To effectively create and analyse the complex primary timber structure it was decided that the use of a modern 3-dimensional structural analysis software would be the most appropriate option. For this purpose Trimble’s structural design software ‘Tekla Structural Designer’ (TSD) was adopted. Within TSD is the capability to model and analysis timber sections of defined geometry and material properties. The architects details, based on the archaeological evidence, for how the roundhouse shall be constructed as shownin the gallery below

The site upon where the roundhouse is to be built is of archaeological importance. As such one of the stipulations was that the foundations were not permitted to embed more than 50mm into the ground. With this requirement along with the need to infill suitable material to raise ground levels on the site the decision was taken that a reinforced concrete raft foundation would be the best foundation to support the timber structure. This would accommodate the many timber columns and walls of the roundhouse and prevent differential settlement

The TSD analysis model created for the roundhouse is as shown in the gallery below (click on images for larger view). As can be seen this modelled accurately the geometric intention from the architects details. Low grade timber was assumed in the analysis to conservatively model the structure where the intention is to use freshly cut green trees as the main structural members.

One of the benefits of TSD is that it was able to accurately model the wind loads on the structure in any direction by the use of advanced wind loading software that positions the building at its exact location on site. 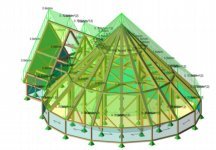 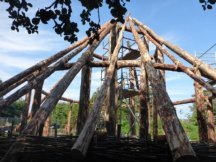 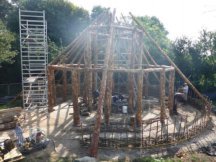 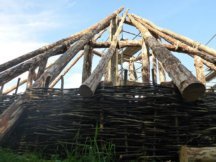